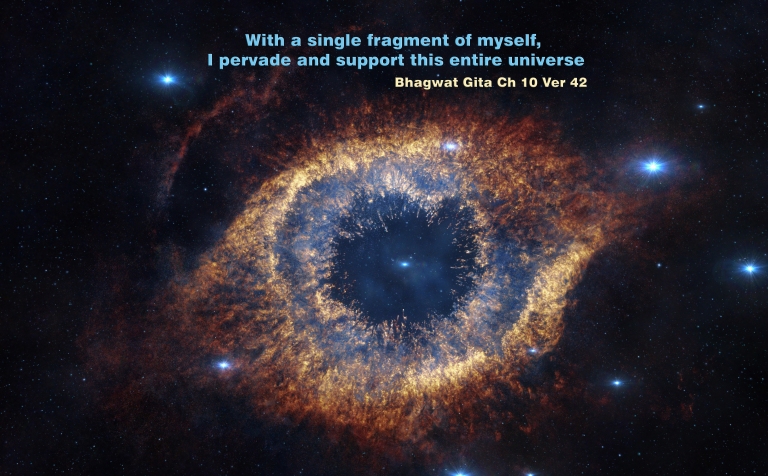 This body I inhabit is formed of Stardust born of Earth, third planetary body from Sol, one solar system among many clustered within the Milky Way galaxy, which is a galaxy part of the local group, that further forms the Virgo super-cluster, one of millions of super-clusters, reflecting the Infinite Array, expressive of the expansive nature of both matter and consciousness and the continuing evolution of the multiverse, transcending time and space within the remorseless imperative of the evolutionary process occurring within the soul of each moment, born anew with each thought and subsequent action at every level of Creation Become. My experiences and genetic programming, explicit towards the manifestation of my own personal destiny as a microcosm of our shared, collective destiny, the fulfillment of an imperative born far beyond my, or our, capacity to conceive of in its awesome and terrifying immensity.

Our minds are not evolved enough to conceive infinity as a concept. It is the reason we give it names and forms, so our minds can build an emotional connection to the concept that cannot be simply fathomed by mental introspection. Scientifically, infinity is something so immensely big or small that we can’t put a number to it.  Spiritually this is a concept that can only be experienced by consciousness in perfect stillness. Great sages in the ancient Indian culture were able to directly experience infinity and carve out different paths for seekers to experience the same. This is called ‘samadhi‘.
This process of directly experiencing infinity is called ‘Yog’. It is correctly pronounced as Yog. It has been mis-pronounced as  Yoga in the west. And just as it is mis- pronounced, it is also highly misunderstood. Not only in the west but it Indian culture as well.  In almost all cultures yoga(Pronounced as ‘yog’ {to understand the correct pronunciations we would need a transliteration and pronunciation key, which may be introduced later}) is understood in a variety of ways.As a series of stretching exercises through which one can feel healthy and fit; some understand it as a series of breathing techniques for good health, release of tension and practices for concentration. Some understand it as a set of physical and breathing exercises for management of diseases and use yoga as therapy, some use it for longevity. All these are useful, ethical and laudable but these are only parts or by-products of yoga. Yog’ traditionally comes from yuj which means “to join” and it is the process of union with the self. This self that is spoken about isn’t the narrowed self with the “I-sense’. It is the cosmic self or the transcendental self which is much subtler and much more expansive than either the gross physical or the gross subtle body (which many understand to ‘be the soul).
Large volumes of scriptural texts have been mis-translated or translated out of context. Culturally, the cream of the vedic knowledge( This we will get into later) is only for the very learned brahmins, who were always free to interpret it to their disciples as they pleased. Due to this, the essence of how the great ancient knowledge needed to be interpreted has been corrupted over time.
This blog is an attempt to clarify and arrange for the reader, some of this ancient knowledge, so that one may be able to decipher and carve out the path of ‘Yog’, relative to ones nature. Ample examples by quoting the ancient texts will be made. From the next blog we shall begin by going deeper into the understanding of ‘Yog’ and the different systems of ‘Yog’.